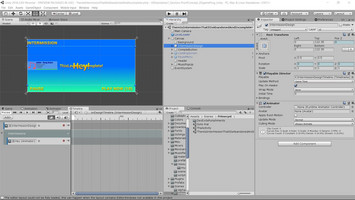 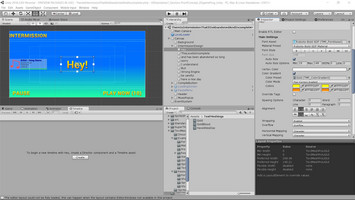 We have prepared the intermissions after being figuring out these Music player error that stuck its fade out as the time scale pauses. I mean... when the game pause, we stop time. The problem is,

The Fade out stuck!

Because the fade out relies on the game time scale. It should have been based on the realtime clock. We wish to find how to get the realtime delta time.

So I edited the script of the music player and add extra function that doesn't use fade function. instead to directly stop the audio source.

it works well! no error. after force pause, the play still plays fine. previously made mistakes.

If the script wasn't made by me, it will be much harder to figure out!

Hence why I preffer Indie development.

If the contributor went Inactive, I dedd. I strand.

It's inefficient and Real heavy!

To just have one man power on it. like you put this Raspberry Pi, the only one, and program it to mine Bitcoin, just be like that, while it's much better to have another Raspberry Pi, make these interconnected to become super computer like shown in Tinkernut Cluster Computer, that cooperatively appends each others' power.

But there is trouble!

Disagreements rating increases for every addition of member!

Like there will be one on one disagreement. and if you consolidate, both will be 50 50 agree in my opinion. It's bullpoop or Out of bound luckiness to have both agree at some point of resolving conflicts.

I found my fellow has been stranded, experiencing complex unable to start Unity trouble that is "too important" to solve, causing him losing choice than to emmerge with Perkedel as Volunteer.

I do disagree and fully uncomfortable! I wish be one.

The good design only available on biological, atleast Homo sapiens as of now. There is no good design from any Machine learner Intelligence whatsoever, and believable to future there'll be won't any! sort of.

These robot can only replace Homo sapiens for repetitive task like "Foxconn slavery the cursed job". Sorry brand mention to rant. it's true and I hate it.

Then to change the job of all human to do something creative and unique.

I'll see another human to be hired as. I can't deny. But I understand how not to make them not to do repetitive task / curse. Just to make them do something unique and creative. Because human is meant to be creative and Robot eases tasks.

Also, I have noticed progress lag due to personal travel event my family held. Me and fams went to places in this holiday as usual. as usual for my fams gather in grandmother's house.

This is bad. I see the Merry Christmas has just touched now, feels like about reaching 1 January and did not yet

Bonus. I saw incredibly hellish Tsunami again! now more dedds. that's more tragic than recent crash. it's on Anyer. Praise the Lord we weren't there. It's dangerous. probably another Azab? I cannot see that. it's serious trauma. Condolences has became cliché recently. Sorry as well been too.

That is all for today's update.

Thank you for your attention.